It's a wrap! Stainless steel gallery shines a light 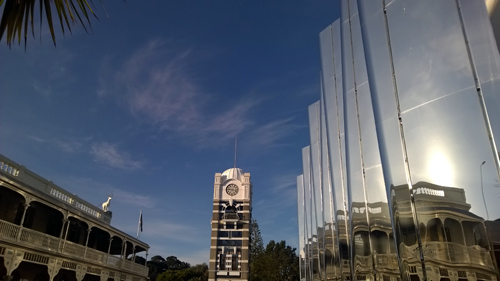 Waving to the world

The Len Lye Centre will be the permanent home for the works of Len Lye, a visionary New Zealander sculptor, kinetic artist and filmmaker. In his hay-day, Lye was as famous in New York as he was in New Zealand, and for that reason alone the new centre and its dramatic 14m high waving mirror-like facade will receive broad international attention. It will operate as a combined art museum with the Govett-Brewster Art Gallery, which is being earthquaked strengthened and refurbished.

There were many New Zealand and local New Plymouth companies involved in what was to be something of a controversial project - largely due to cost. Over two million of the 11.5 million dollar budget for the centre went on its stainless steel face. While this was a lot of money for a facade, it will not only stand the test of time, it will be a calling card for New Zealand's ingenuity, design and manufacturing competence in stainless steel.

Let there be light 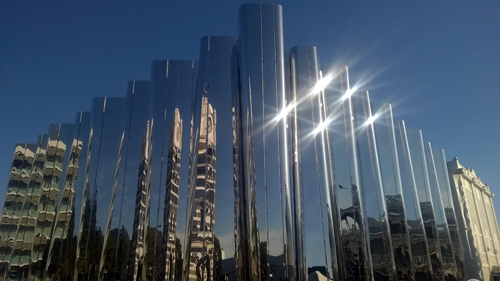 Stainless steel was appropriate to the centre for several reasons: first, many of Len Lye's giant kinetic sculptures were made in stainless steel; second, it is highly dramatic in its own right; and third, the undulating surface bounces light through a new urban square, lightening up darker spaces - a bit like a horizontal periscope.

The architects on the project, Pattersons, worked closely with local New Plymouth stainless steel fabricators, Rivet, to work out the best way to fabricate and connect the panels to create a seamless facade. While CAD drawings paved the way, the architects and the fabricators made a series of physical models to work out the geometry of the facade.

The design achieves a seamless effect, slotting into place a bit like a giant Meccano set on site. Essentially the stainless steel hangs over the sculpted concrete columns behind. A channel in the stainless steel sheeting fits into the concrete using a pin arrangement that fits through to slots on both sides of the channel - so the panel comes along and just drops onto the pin. The intricate fixing design allows for movement of heating or cooling during that day.

With over 540 sheets fitting together onto concrete to form the facade and weighing in at 32 tonnes, the supply of the alloy was a big ask of local supplier Steel & Tube Stainless. Product Manager at Architectural Stainless, part of Steel and Tube Stainless, David van Beusekom explains what was involved.

"One of the most challenging aspects was sourcing the oversize mirror stainless sheet in the bright annealed finish required. In the early days of the design, we worked closely with Rivert as alternative finishes and grades were considered. The requirements were often outside the scope of what could be manufactured on the international market and a world-wide hunt was on - we collaborated with suppliers in the UK, Japan and Taiwan, often pushing them to the limits of their capability to ensure we could guarantee supply.

"With S&T facilities in main centres all around New Zealand it meant we were able to store the product at our New Plymouth branch, ensuring only on move per shipment. That way we could deliver individual ton packs to Rivet as the fabrication process unfolded." 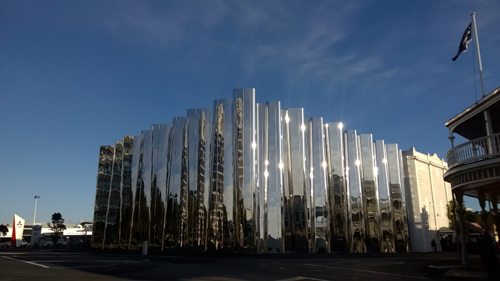 "The stainless steel used was 316L BA, with a no. 8 finish. This was covered in two layers of PVC, which is unusual. We wanted double the amount

of protection, as this plastic sheeting was left on until the end of project when it is peeled off.

"The stainless steel started off as a flat sheet, and then we send it down to the laser cutter, and cut in slots as part of the hanging system for the whole building. Next we put it into our formers to create the curves that the architects were looking for."

The Len Lye Centre will create powerful and memorable experiences for local and international visitors alike - generated by the art and ideas of Len Lye and of course by its spectacular exterior.