The Australian War Memorial in Hyde Park Corner, London stands as a symbol of freedom and an enduring spirit of strength.

To commemorate the men and women who fought and died for Australia alongside Britons in the two World Wars, Australian architectural firm Tonkin Zulaikha Greer and artist Janet Laurence designed the Memorial to reflect the sweep of the Australian landscape.

Grade 316L was specified for its corrosion resistance, particularly as the Memorial comprises a water feature that periodically cascades water across the wall to highlight the names of the hometowns of our soldiers. 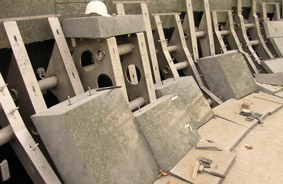 Stainless steel was used primarily in the construction of stainless steel cradles which were fabricated in Australia, shipped, positioned and lifted into place to support the granite.

All welds were pickled and passivated to provide protection from the bromine and chlorine’s likely to be deposited on the frames from the water forms built into the Memorial.

Australian-based firm Design and Survey Neon (DSN) played a leading role in the design and manufacture of the supporting structure by using 3D modelling techniques.

The 3D modelling allowed the manufacture of components and assembly of the job to become a seamless process.

DSN modelled the granite wave wall and supporting cradles. The templates for the granite blocks and their fixings were then lifted from the model to enable the fixings to be pre-drilled prior to assembly. 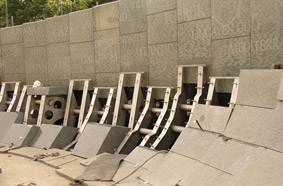 The use of laser cutting and CNC technologies allowed DSN to fabricate to near machining tolerances. Laser etching of assembly notches were added for simple fabrication and installation.

Coordinates for supporting cradles from the model were used to determine correct on-site positioning via electronic theodolites.

The granite blocks were positioned with a 6mm gap vertically and horizontally to a tolerance of plus or minus 1mm. Precise accuracy was required to avoid accumulation of errors because of its wave like design.

Most of the components for the Memorial were imported from Australia. Water features and water effects were created by Waterforms International and all the stone work was assembled by Australians.

This article was featured in Australian Stainless Issue 28, May 2004.

Other images: 316 stainless steel cradles were lifted into place to support the granite blocks that form the wave wall.