FAQ 7: Guidelines for Use of Stainless Steel Underground

Stainless steel can provide excellent service underground. It is stronger than polymers and copper, and its resistance to chlorides and acidic soils is significantly better than carbon or galvanised steels.

The performance of stainless steel buried in soil depends on the nature of the buried environment. If the soil has a high resistivity and is well drained, performance can be excellent even in conditions where other unprotected materials suffer degradation.

The Nickel Institute guidelines for burial of bare stainless steel in soil require:

Additional recommendations include the absence of oxidising manganese or iron ions, avoidance of carbon-containing materials and ensuring a uniform, well-drained fill. If the guidelines are breached, then either a higher resistivity is required, i.e. measures to lower moisture or salts and ensure resistivity exceeds 10,000 ohm.cm, or else additional protective measures may be required.

In comparison, the piling specification (AS 2159) guidelines for mild steel require a pH greater than 5 and resistivity greater than 5000 ohm.cm for soils to be non-aggressive. It is rare for bare mild steel to be buried, i.e. typical specifications include a wrap or coating possibly with a cathodic protection system.

However, it is well established that even a carbon steel pile driven into undisturbed soil suffers only a few micrometers per year corrosion. This is because of the joint effects of lack of oxygen and the limited diffusion in compacted soil, which means corrosion products cannot escape and therefore stifle corrosion reactions.

The general guidelines for immersed service that are in neutral environments at ambient temperatures and without crevices, 304/304L may be used in chloride levels of 200 ppm, 316/316L up to about 1000 ppm chloride and duplex (2205) up to 3600 ppm chloride. The super duplex alloys (PRE>40) and the 6% molybdenum super austenitic stainless steels are resistant to seawater levels of chloride, i.e. approximately 20,000 ppm. These guidelines are easy to apply in aqueous solutions.

Soil tests for chlorides may not exactly match actual exposure conditions in the soil. Actual conditions may be more (or less) severe than shown by the tests. The difference is calculable but in practice, the aqueous limits can be used as general guidelines. More specific recommendations, based on published guidelines, are provided in the table above.

It may seem redundant to asses both chlorides and resistivity. Both are required as the resistivity is primarily affected by water content and if it is low, then quite high chlorides could be tolerated. Despite these recommendations, most Australian practice is to use 316/316L or equivalent, primarily because of variable soils.

Potential acid sulphate soils are widespread, particularly in coastal marine areas as described in https://www.qld.gov.au/environment/land/management/soil/acid-sulfate/identified. Once disturbed and drained, which also allows oxygen access, such soils typically become more acidic than pH 4 and will attack metals (although stainless steels will be less readily attacked than other metals). Detailed assessment is required if using metals in such an environment as the effect of other aggressive ions is likely to be more severe at low pH. 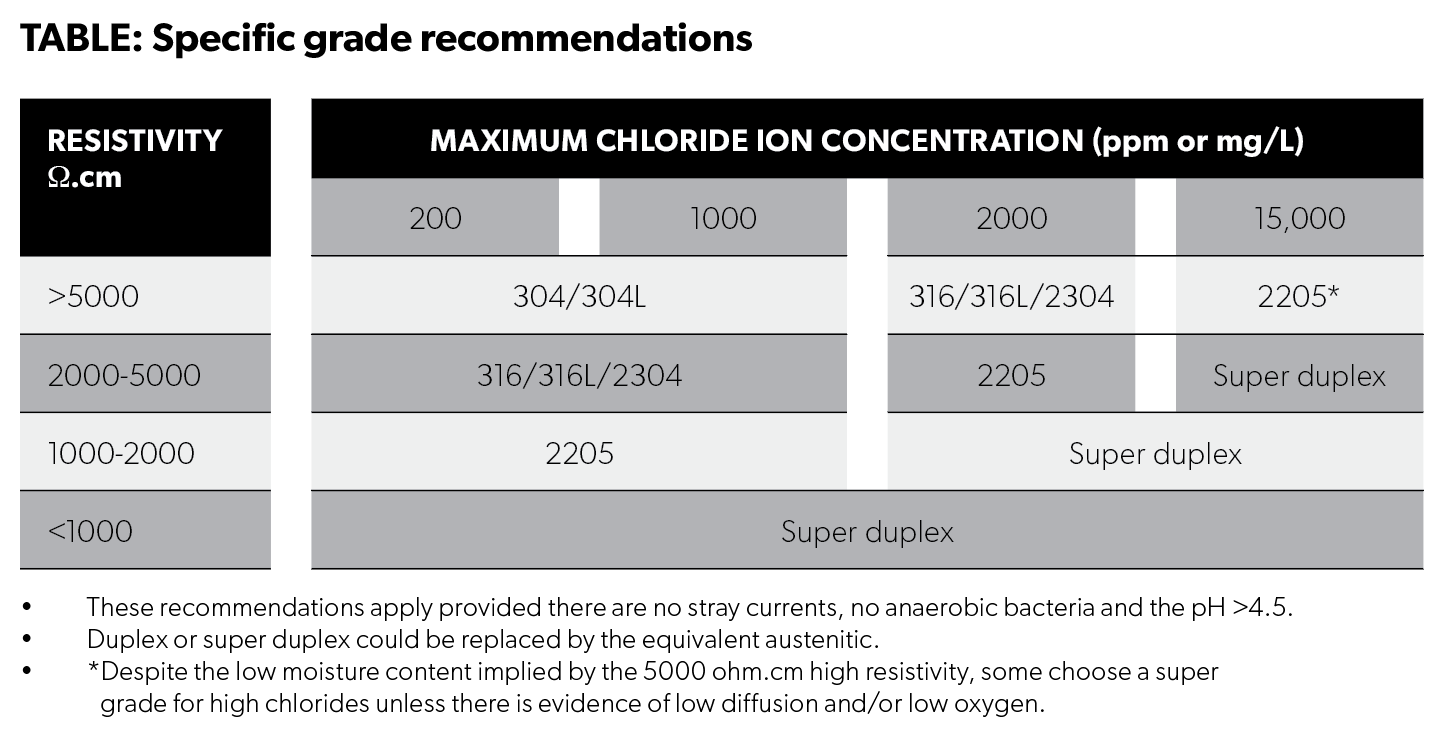 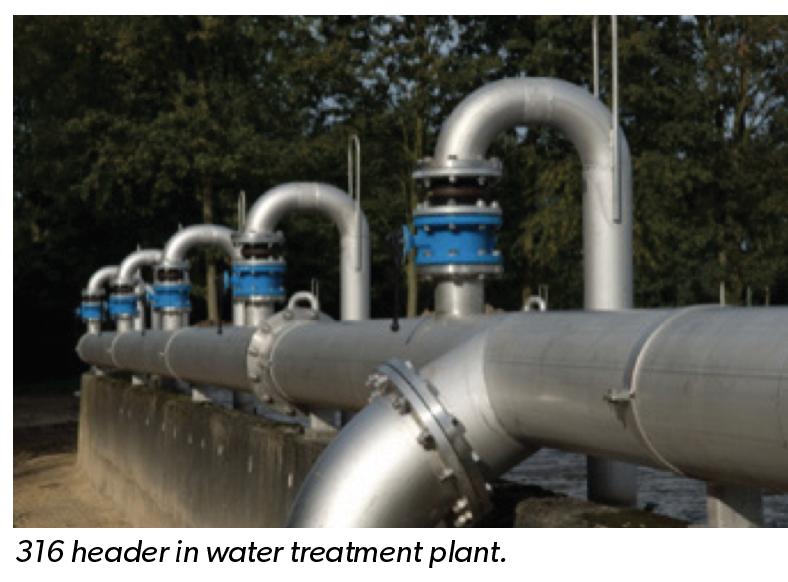 As noted above, duplex stainless steel of similar corrosion resistance (PRE) to 304 and 316, respectively, are expected to provide similar results when buried.

On a more practical level, there are several common approaches that are used when burying stainless steel:

In all these cases, the assumption is that the stainless steel has been fabricated to best practice. This includes pickling of welds (or mechanical removal of heat tint and chromium depleted layer followed by passivation to dissolve sulphides) and ensuring contamination by carbon steel has been prevented. It is also assumed that the buried stainless steel does not have stickers or heavy markings that could cause crevices and lead to attack.

All buried metals, including stainless steels, are at risk if there are stray currents from electrically-driven transport, incorrectly installed or operated cathodic protection systems, or earthing faults in switchboards. Stray current corrosion can be identified as it causes localised general loss rather than pitting. It is also very rapid.

WHAT TEST METHODS ARE USED?

There are Australian and ASTM standards giving basic measurements of resistivity on site with 4 pin Wenner probes or in a soil box in a laboratory. More detailed checking includes water content, chlorides, organic carbon or Biological Oxygen Demand (BOD), pH or redox (or Oxidation Reduction Potential [ORP]) potential - which assess microbial attack risk but also captures the effect of oxidising ions and dissolved oxygen. Most of these test methods are covered in 'Soil Chemical Methods: Australasia' written by George E. Rayment and David J. Lyons and published by CSIRO. 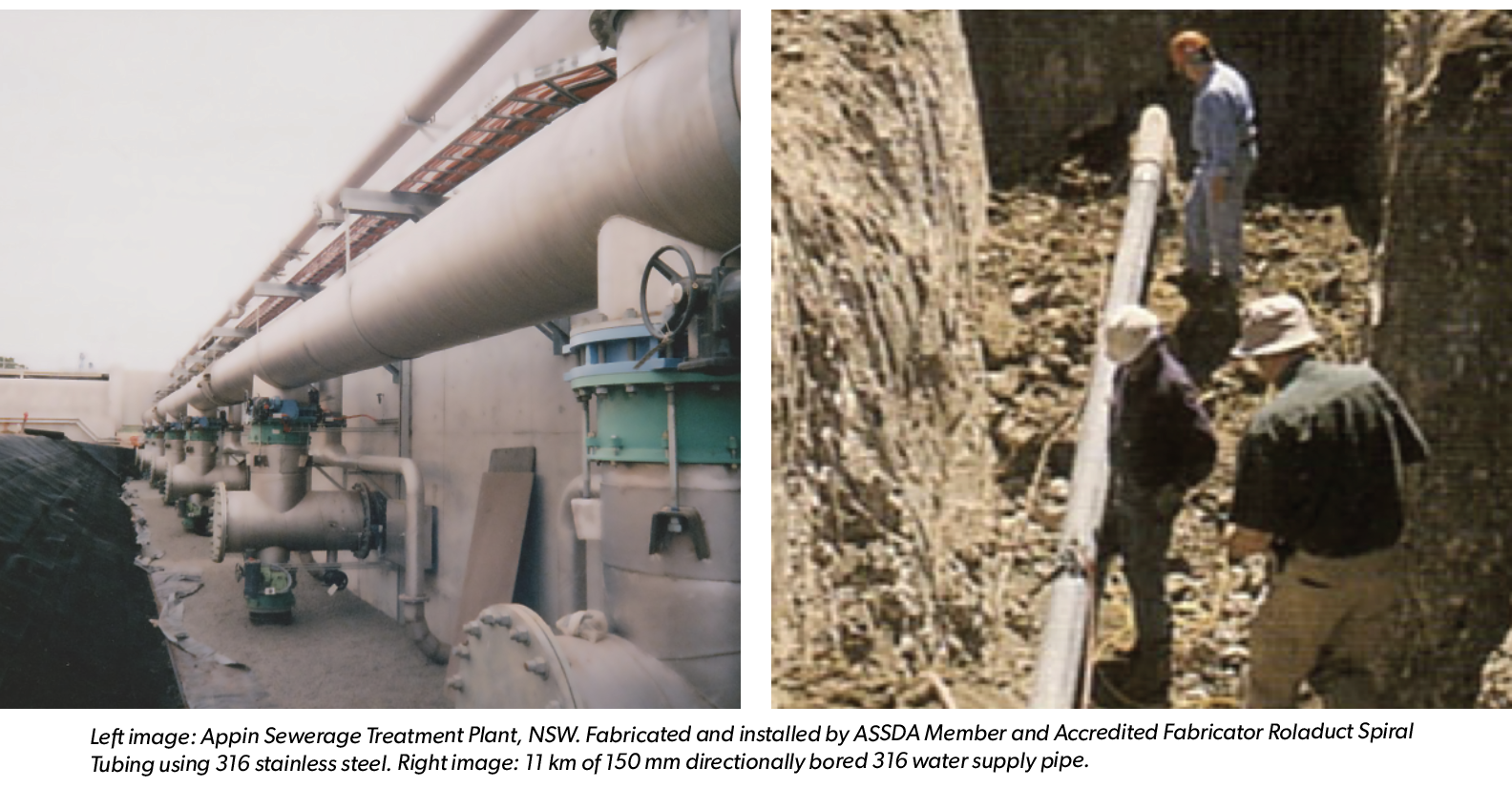 IMPORTANT DISCLAIMER: The technical recommendations contained in this article are necessarily of a general nature and should not be relied on for specific applications without first securing competent advice. Whilst ASSDA has taken all reasonable steps to ensure the right information contained herein is accurate and current, ASSDA does not warrant the accuracy or completeness of the information and does not accept liability for errors or omissions.