No 4: The Workhorse Finish

No 4 finish stainless steel is the workhorse of the light fabrication industry. The easiest of the finishes to maintain, No 4 finish is used for work surfaces, handrails and where appearance is important.

A 'No 4' surface is produced by cutting the surface with abrasive belts to remove a very small amount of metal without affecting its thickness.

For architects and designers, No 4 finish gives low gloss and best apparent flatness of panels.  For fabricators, the No 4 finish is directional, allowing easy matching of surfaces and refinishing of welds. For end users, the surface can be repaired to remove any service damage.

No 4 finish is duller than the other common finishes, 2B and BA and is generally used where lower reflectivity or gloss is required and where welds and other fabrication marks are to be refinished to match the original surface. This is not possible with 2B and difficult with BA.

Abrasive belts have very fine grains of refractory material such as silica, alumina and zirconia embedded in an adhesive layer on a flexible cloth or paper backing. The belts are wider than the stainless steel, which is usually worked on as coil, or sometimes in individual sheets. The steel is run slowly under rolls, on which the abrasive belts run.

The polishing machines at stainless steel mills lubricate the cutting action by flooding the strip with oil. This helps to keep it cool, and gives a finer, more uniform surface.

The variability of the process means not every No 4 finish looks the same, even from the same source. Different manufacturers use belts with different combinations of grit sizes, and the finish can vary through the life of a set of belts.

Where it is important that the appearance of material matches on a job, it should all be taken from the same pack of sheets, used sequentially and in the same orientation. A reasonable match in appearance can be achieved more readily with No 4 finish than with 2B or BA mill finishes.

Until recently, standards defined No 4 finish in terms of the coarseness of the abrasives used to produce a general purpose finish widely used for restaurant equipment, kitchen equipment, shopfronts and food processing. New editions of the American and European standards define limits of surface roughness achieved.

Finishes produced by use of abrasives may be called ground or polished or abraded or linished. These words describe a process and do not specify the end result.

ASTM A480 defines No 4 finish simply as, “General purpose polished finish, one or both sides”. It also states, “No. 4 - A linearly textured finish that may be produced by either mechanical polishing or rolling. Average surface roughness (Ra) may generally be up to 25 micro-inches (0.64 micrometres). A skilled operator can generally blend this finish.”

The practice in Australia is only to use 'No 4' as a description of a polished finish and it is not a rolled finish. The European standard, EN10088-2, defines two finishes, '2J' and '2K'. There is no prescription of the appearance or roughness of the '2J' finish, but '2K' is defined as surface Ra below 0.5 micrometres. The notes state, ”Additional specific requirements to a 'J'-type finish, to achieve adequate corrosion resistance for marine and external architectural applications.”

The surface traces of Figures 1 and 2 show comparisons between typical No 4 and 2B finishes. Unlike a 2B finish which is generally rougher on thicker coil, the roughness of No 4 does not vary with the steel thickness.

While Ra can be specified to give better control of the corrosion properties of the surface, it correlates only moderately with appearance and is also difficult to measure reproducibly.

Gloss is the amount of light reflected whether specular (mirror like) or diffuse. It is moderately correlated with appearance and with surface roughness, but can also have problems when used for specification.

For critical jobs appearance is best specified using reference samples viewed under agreed conditions. These should be large enough that they can be viewed from a variety of angles and distances - appearance can vary with viewing angle.

The corrosion resistance of a No 4 finish is usually lower than that of a mill finish (BA or 2B) on the same grade.

The surface scratches or grooves produced by abrasion expose sulphide inclusions, which are always present in all steels, and can act as a catalyst for corrosion.

The passive surface layer is more likely to be disrupted somewhere on the vastly increased surface area with all its sharp peaks and deep valleys. It is difficult to keep the surface clean when there are intersecting valleys, torn metal flaps or peaks that have been folded over.

Corrosion resistance may be reduced depending on the stainless steel grade used. By using grade 316 with a No 4 finish in aggressive environments, the corrosion resistance is negated and may be less than on 304 with a 2B or BA finish.

The orientation of the No 4 finish is also important. When the lines on the surface are vertical, drainage is easier and corrosion resistance is better than when the lines are horizontal.

Corrosion resistance of No 4 finish can be improved by pickling the surface in a mixture of hydrofluoric and nitric acids, or passivating in a nitric acid solution.

Unfortunately it is almost impossible to achieve a uniform finish, and it is rarely practical to pickle for better corrosion resistance. Passivation is often used. ASTM A967 “Chemical Passivation Treatments for Stainless Steel Parts” specifies a number of treatments with various acid strengths, temperature and contact time.

Electropolishing the surface can also improve the corrosion resistance and brighten the surface. The peaks on the surface are smoothed, reducing the Ra value and increasing the reflectivity or gloss. The sulphide inclusions may also be removed or reduced.

Protection of the Surface

No 4 finish is usually supplied with a protective plastic film of white polyethylene, which often has printed lines on the plastic in the same direction as the No 4 polish.

It is best to keep the film on the surface of the steel during fabrication, to prevent handling and transport damage. The film has limited resistance to sunlight, and should not be left on the steel in the sun for more than a week or two - an hour or two if the film isn't black underneath. The film may bake onto the surface and either become brittle or tear into strips on removal, or leave the glue on the steel surface.

Glue on the steel will trap dirt, and may cause rapid surface discolouration or tea staining.  If it is suspected there is residual glue on the steel, swab the surface with a solvent such as Methyl ethyl ketone (or MEK - a solvent) available from panel beaters suppliers. You may need to test other solvents, depending on how the glue has polymerised.

The water break test tells you the surface is clean - clean water dries as a film, doesn't stand in bubbles on the surface. A final wipe with a glass or window cleaner will ensure a streak free finish.

No 4 finish can usually be kept clean by wiping down with a damp soft clean cloth. For grease, moisten the soft cloth with ammonia solution, or with one of the household liquid grease removers. Very hot water is also quite effective.

Wiping should always be in the direction of the polishing lines. Some No 4 finishes can pull threads and fluff from the cloth which are very hard to get off the steel.

Abrasive cleaners and materials such as Scotchbrite™ should never be used as these will change the appearance of the surface. If you want to change it, try an inconspicuous area, then treat the whole surface - but it's difficult to get it uniform.

There are also white powder stainless steel cleaners (Clark and Esteele), made of sulphamic acid, which can be wiped over the surface on a damp rag to brighten it - test an inconspicuous area first. Fingerprints can be made less obvious by applying a light oil to the surface. There are many proprietary products available, usually labelled 'stainless steel cleaner'. Choose an oily one, although it will tend to trap dust. 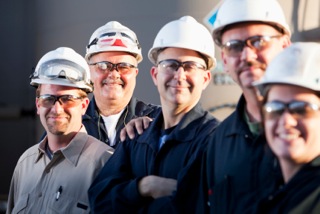