At a time when so many industrial processes are computer-driven, there is still a place for human knowledge and experience in the highly specialised area of hydro-turbine manufacturing. 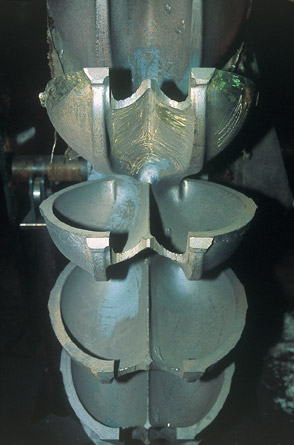 Steel Castings Pty Ltd, situated in Port Melbourne, has a reputation for precision moulding which has secured the firm contracts to produce two 'Pelton Runners' – the heart of the turbine – for a Victorian Hydro Power Station, working with the Norwegian designers, GE Australia and Acron Engineering.

Steel Castings have been making Peltons since the mid-90s. Measuring 2m in diameter and weighing in at 3.5 tonnes, these units are the largest so far. They are designed to withstand water cascading onto them from 400m above for 20 to 30 years to generate about five megawatts of electricity.

Despite their complex shape, the Peltons were cast in a single pour.

Technical Director Jim West explains the steps involved in achieving such a feat of engineering.

First a wooden pattern is made from drawings. Thousands of measurements must be checked. For example, there are 64 measurements for each of the Pelton Runner's 21 buckets. The pattern took about five weeks to make followed by a week of refinements.

One of the skills involved in pattern manufacture is estimating the contraction allowances for the shrinkage and distortions that occur during cooling and heat treatment. With only a 3mm tolerance window, this is something that can't be done by a computer, says Mr West. Once the pattern is complete, the mould and cores are produced from sand combined with a bonding agent – 17 tonnes of sand were required for this mould. The stainless steel used is CA6NM, a modified grade 410, poured at a temperature of nearly 1600ºC.

The mould is constructed so that the metal flows into all areas of the shape in less than 30 seconds of pouring time. The casting has to cool for seven days before it can be inspected. Then
the 'plumbing', the additional pieces which enable pouring the casting, is removed and the Pelton is heat treated at 1020ºC over a 23 hour cycle to strengthen the structure of the metal before final tempering and machining. 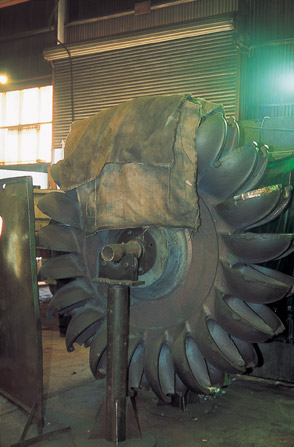 From drawing to installation the procedure takes about five months. The resulting finished technical marvel is worth hundreds of thousands of dollars.

ASSDA member Steel Castings Pty Ltd has its roots in the 19th century. It has operated in Port Melbourne since it was founded and employs a workforce of around 30 depending on current projects. The company's main business is manufacturing stainless steel and nickel-based alloy valves for the oil, gas and petrochemical industry. The firm also makes stainless steel ingots for the forging industry.

Above right: cast detail of buckets