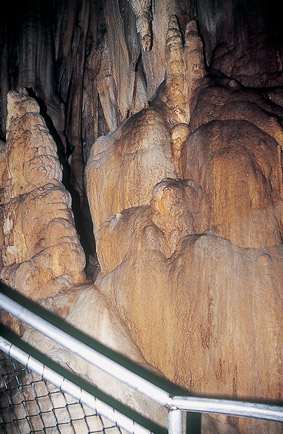 According to the Site Co-ordinator Keith Vanderstaay, the caves "have been reinvented with the completion of a state of the art, computer-controlled lighting system which will change the way everybody will see the cave."

New stainless steel handrails allow visitors to navigate the cave in safety, and are designed to last for generations, minimising the need for maintenance in the caves' sensitive environment.

Tasmania’s Parks and Wildlife Service, as part of a safety review of structures used by the public, identifed the 1930s galvanised pipe handrails as substandard to the new AS2156.2 Walking Track: Infrastructure Design and decided to replace them.

Another primary concern was the environmental damage being caused by the breakdown of the galvanise.

The Service looked at using stainless steel or aluminium for the project and after all considerations, including cost, the decision was made to use grade 304 stainless for the posts and rails.

The job consisted of 263m of rail along around 90m of walkways, stairs, ramps and viewing platforms which snake through the cave.

Sinclair Knight Merz was engaged to design, seek tenders and supervise construction. The project presented some unusual and physically demanding challenges for the fabricator, Prins
Metalwork of Kingston.

Adrian Prins and his firm worked on the project for two and half months, with a team of four or five people living at the caves for half that period.

All of the installation work, which was carried out in winter, had to take place at night so that the caves could stay open to visitors during the day. For the same reason, no voids were allowed to remain at the end of each session. The workers had to carry out all the old carbon steel balustrades by hand, just as they had to carry in all the new rails and their equipment, down 200+ steps into the cave.

Once inside they had to be very careful not to touch any of the formations, which are extremely fragile.

Because no angle grinding was allowed inside the cave for environmental reasons, they used a reciprocating saw to remove some 190 old posts.

The stubs were capped and the new posts installed. MIG welding was allowed, but kept to a minimum. There was only 240V, 10 amp power supply throughout the cave.

Where possible, fabrication took place at the workshop and was fine-tuned on site. The nature of the project meant that there were many adjustments to be made as few of the
balustrades have consistent angles. The concrete steps and landings, which were boxed in situ to adapt to the contours for the caves’ public opening in 1939, are quite irregular.

While those who worked on the project recall the cold and the dark conditions, visitors can now safely enjoy the beauty of the cave in the knowledge that the new stainless steel infrastructure is protecting the caves and its visitors.