Sydney's recently redeveloped Chifley Square now pays tribute to its namesake in a dramatic, yet personable, manner - an 8m tall stainless steel sculpture of Ben Chifley towers over the square, forming part of City of Sydney's capital works program in the lead up to the Sydney 2000 Olympics. 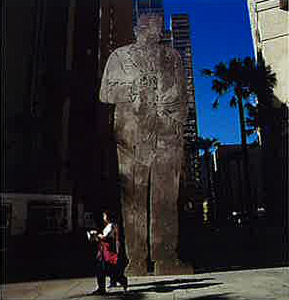 Sydney artist Simeon Nelson designed 'Ben Chifley' and a glass and stainless steel wall on the site while working as part of the multi-disciplinary design team involved in the site's $3 million redevelopment. Hassell architects (Sydney) were given open guidelines for the design of the site, but two of the objectives were to see Chifley appropriate recognised and to provide a windbreak on the Hunter Street side of the square.

Nelson specified 5 tonnes of 20mm grade 316 stainless plate for two cut-out images of the former war-time treasurer and the post-war Labor prime minister. The plates are positioned in parallel and bolted to a stainless frame, allowing 1mm tolerances.

Nelson designed the sculpture in stainless steel because of its long-term durability. He also felt the material was appropriate because it is often used as an industrial product and Chifley kick-started industrial growth after the war.

The sculpture was fabricated by CBD Prestige Metal Works (Sydney) from material supplied by Sandvik Australia (Smithfield, NSW). After shotblasting by IMP (Sydney), the final surface finishing and passivating was carried out by BHM Stainless Technology Group (Keon Park, Vic) using a specialised process developed by the company for unusual projects of this nature. 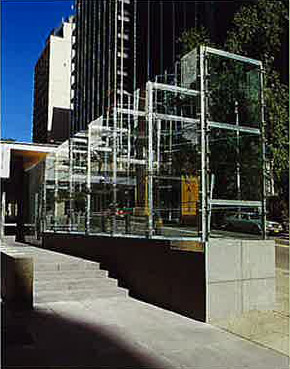 Similarly impressive is the 'Lightwall, Crucimatrilux' (also fabricated by CBD), which incorporates panes of transparent glass bolted together on nine stainless frames made of 74mm x 20mm bar with a mill finish. Because of the fine tolerances required, dowel and glue were used instead of welds to hold the frames together.

The 10.8m long and 3.2m tall wall serves a structural function as an extension of the back wall of the cafe and also acts as a wind shelter. visually, it provides a contrast with cafe's wall, which is made from white coated glass.

The redevelopment of the site, which is semi-circular in shape and divided in half by Philip Street, was aimed at unifying the two spaces to reflect the original intent of the site's 1937 design. Together, the Lightwall and Chifley sculpture form part of an impressive, contemporary response to historic town planning.