Brisbane's New Farm Riverwalk is one of the city's beloved icons. Originally constructed in 2003, the Riverwalk was used daily by over 3000 cyclists, pedestrians and runners before it was washed away during the 2011 floods.

After a construction period of nearly 18 months, Brisbane City Council’s re-imagined New Farm Riverwalk has now opened to the public, connecting New Farm to the Brisbane City via the Howard Smith Wharf Precinct.

Engineered by Arup, the Riverwalk has a design life of 100 years and sits 3.4m above mean sea level on robust piles.

Critical to its design and life expectancy is the extensive use of stainless steel for both structural and aesthetic purposes.

Key design elements featuring stainless steel include balustrades, skate stops, help point enclosures, light posts, signage, electrical enclosures, deck furniture and bins at the node structures. For additional durability, stainless steel reinforcement conforming to BS10088 and BS 6744:2001 was used in the soffit of the precast concrete girders where the structure could be subject to wetting and chloride contamination in the future.

Constructed by John Holland, the project involved a high level of collaboration between multiple suppliers and fabricators to meet the exacting demands of the specification.

John Holland Project Engineer Cameron Pahor said one challenge was programming works in accordance with project specifications to reduce contamination between carbon steel and stainless steel, both of which were used within the precast concrete girders incorporated into the Riverwalk.

ensland construction division was contracted to supply 385 tonnes of stainless steel reinforcing bar, with The Australian Reinforcing Company (ARC) sub-contracted to schedule, cut and bend the rebar in a specifically prepared quarantine location to prevent processing and storage contamination issues.

Valbruna Special Products Manager Scott Ford said the majority of the rebar (in diameters ranging from 12mm to 40mm) was produced to precise precast tolerances predominantly using Reval® special Grade AISI 2304 (1.4362). Grades 2205, 316L and 304L were also used due to the unexpected increase in tonnage required: nearly 40% more than original project calculations was required, making the Riverwalk the largest use of stainless steel rebar in Australia to date.

“Using stainless steel rebar ensures that a landmark structure such as the Riverwalk is kept open to the public rather than lengthy maintenance closures due to corrosion issues,” he said.

Down time was also minimised during construction, with Valbruna holding extensive stocks on the floor in both Italy and Australia of stainless Reval® rebar, enabling delivery to site within 48-72 hours of final approval of drawings. Manual templates were produced for many of the bars to ensure the accuracy of the bends and eliminate site down time.

Minimising maintenance for the visual elements of the Riverwalk was also a priority. To this end, ASSDA Sponsor Midway Metals supplied 275 tonnes of grade 316 stainless steel and two tonnes of welding consumables for the construction of around 1900m of balustrading. Midway also supplied 100 litres of Avesta pickling gel that was used to passivate all welds on the balustrades.

Midway Metals Brisbane Branch Manager Sean Lewsam said some of the specified handrail sizes were not available in Australia (e.g. 150x50x6mm rectangular hollow section or RHS) and had to be air freighted in to meet strict deadlines.

Midway supplied the project with 3,522 metres of RHS, 14,500 metres of round bar, 1,924 metres of HRAP (hot rolled, annealed, pickled) flat bar, 1,500 metres of flat bar from their slitting and flat bar machines, and 2,000 metres of mirror tube, storing the material in a dedicated holding area for the duration of the project.

Specific-sized Grade 316 plates were acquired (132 tonnes in total ranging from 10mm to 16mm) to minimise off cuts and wastage during the plasma cutting of stiffener plates, 1500 base plates and 1000 staunchions for the balustrades. Around 26 tonnes of laser cut profile plates ranging from 5mm to 20mm were also supplied.

ASSDA Member Southern Stainless was contracted to fabricate and install three different types of balustrading (solid uprights, mesh wire and glass infill), as well as the other visible stainless steel elements of the project using the stainless steel and welding consumables supplied by Midway Metals. 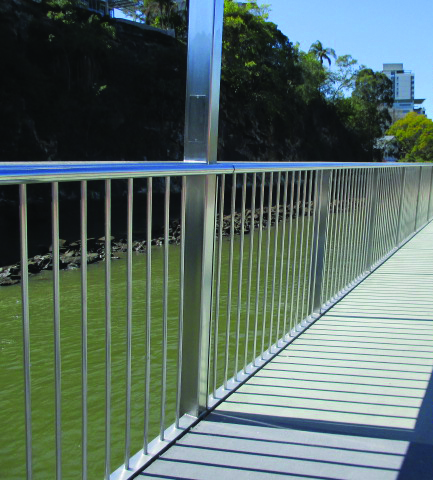 Southern Stainless General Manager Matthew Brown said all stainless steel components were manually polished to a 600 grit finish prior to assembly and welded in compliance with AS1554.6. After fabrication, the 960 balustrades panels (each weighing between 180 and 220kg) were electropolished in-house to Ra<0.5 and then hand polished with silicone-based polish prior to being wrapped and delivered to site for installation. The end product is both visually appealing and certain to stand the test of time.

Strength testing was undertaken for the balustrade/girder connections to ensure the stainless steel couplers, bolts and ferules (supplied by ASSDA Member Ancon Building Products) would not damage the cast-in items during a flood occurrence.

Riverwalk’s robust design makes it resilient to future flood events. The opening span has been relocated to reduce the likelihood of debris getting caught on the structure, and some elements have been designed to collapse in extreme events (rather than withstand the flood waters), reducing the force on the piles.

With the re-imagined Riverwalk now a fixture on the Brisbane’s riverscape once again, residents and visitors can look forward to enjoying the unique experience that Riverwalk offers well into the future.

This article is featured in Australian Stainless magazine issue 54, Spring 2014.