What is the fire rating of stainless steel? This is a common enquiry from ASSDA Members and the construction industry, especially with the current concerns about flammable cladding. The three major branches to this question are covered in this article.

Will stainless steel burn, and if it does, will it give off fumes or facilitate the spread of fire? 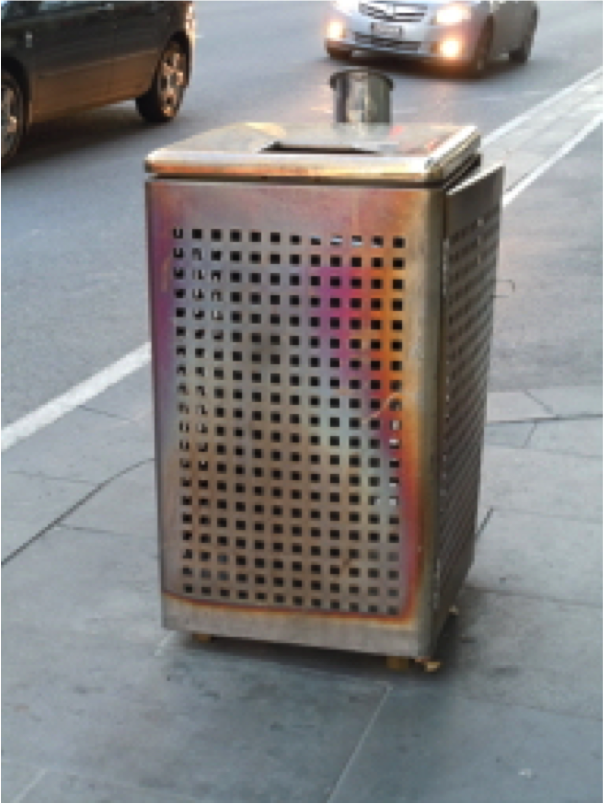 Heating in a fire will obviously have an appearance effect because, unlike the transparent nanometer-thick passive layer formed in moist air, stainless steels heated above about 300oC in air discolour as they grow a less dense oxide layer. This develops from the rainbow colours seen beside welds to a dark and non-protective oxide layer whose thickness depends on the time of exposure and temperature reached. The street rubbish bin shown suffered from a fire but remained functional for almost a year (until the repair cycle reached it) with a decorative rainbow oxide. By way of comparison, powder coated bins would suffer from unsightly burn marks and corrosion.

For austenitic alloys such as 304 and 316, the temperature limits for lifetime section loss due to oxidation is about 870oC (with temperature cycling) so they are routinely used in high temperature furnaces and ductwork. The current trend to apply decorative coatings to stainless steels would require an assessment to determine the combustibility, potential fumes and flame spread of the coating. Tests to AS/NZS 1530.3 would be appropriate.

Microstructural effects of a short-term heat cycle (less than a couple of hours of exposure, such as a fire) could include carbide precipitation (sensitisation) in an austenitic alloy which was not an L grade (i.e. carbon >0.03%). Duplex and weldable ferritic grades should not have sufficient carbon for sensitisation. Sensitisation would degrade the corrosion resistance but not affect mechanical properties. Both duplex and ferritic grades can suffer 475oC embrittlement, however data produced by the International Molybdenum Association (IMOA) shows that this requires more than two hours in the 400oC to 500oC range for a 50% reduction in toughness. This duration is unlikely in most fires.

Will stainless steel provide a barrier to flames and if it does, how rapidly will the heat penetrate the barrier sufficiently to cause damage (usually a specific temperature rise) on the far side?

A satisfactory demonstration is supplied by reference BS 647 Part 22 tests carried out for a British Stainless Steel Association (BSSA) member, Stewart Fraser, who manufacture 316 framed doors which include a cavity filled with non-combustable boards. The results are given at www.bssa.org.uk/topics.php?article=106.

It showed slight discolouration and distortion on the flame impingement side with the sheltered side of the door reaching only 98oC after 60 minutes. The test was continued for another 80 minutes without the failure of flame containment or subsequent opening of the door in its frame. Similar testing was carried out on a 1.5mm thick 2304 duplex sheet fabricated into a simulated ship’s bulkhead with enclosed ceramic wool insulation. With a bright orange glow of an 1100oC metal temperature on the flame side, the “safe” side reached 30oC after 40 minutes and 110oC after 60 minutes. The test was terminated after 120 minutes with containment still satisfying IMO resolution A518 (XIII).

What are the effects (both during and after an event) to the mechanical properties of stainless steel? How do these compare with structural carbon steels?

There are tests as well as a theoretical basis which demonstrate that both austenitic and duplex stainless steels have superior high temperature properties compared to carbon steel. The table below shows the deflection and failure modes of three metre long commercial electrical cable trays loaded to simulate actual loadings. They were heated with 18 LPG burners to obtain an average temperature of 1000oC  to 1050oC for at least five minutes. [Nickel Institute publication No. 10042] 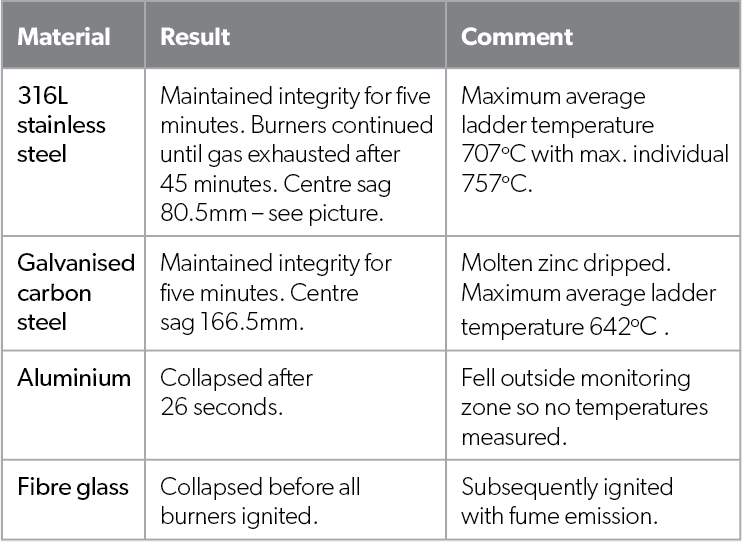 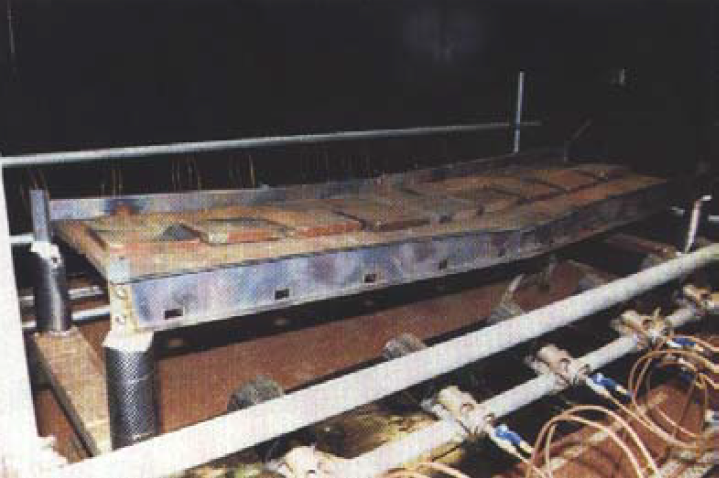 The publication also considers the life cycle costs (LCC) of the use of aluminium, galvanised steel or stainless steel for stairways, handrails, gratings and firewalls, as well as cladding for corridors and accommodation modules on North Sea platforms. Fire risk controls are obviously a major concern although corrosion resistance is also critical. On an LCC basis, stainless steel was most economical especially when its reduced requirement for maintenance periods were included.

In addition to the above testing in cable tray applications, substantial research and application work has since been carried out and codified. Installations include 2205 duplex hangers suspending the slab which forms the floor of the emergency ventilation duct in the CLEM7 tunnel in Brisbane [ISSF].

When considering strength and deflection, the metal temperatures in a conventional fire do not reach levels to anneal the material so any cold work strengthening will raise the temperature for a 50% strength reduction. In addition, as shown in the graph, the reduction in Young’s Modulus, i.e. deflection from a specific load, is less than that of carbon steel for temperatures above ~200oC. By 600oC the modulus retention for stainless steel is 0.75 compared to 0.3 for carbon steel, i.e. less than half the deflection for a given load. 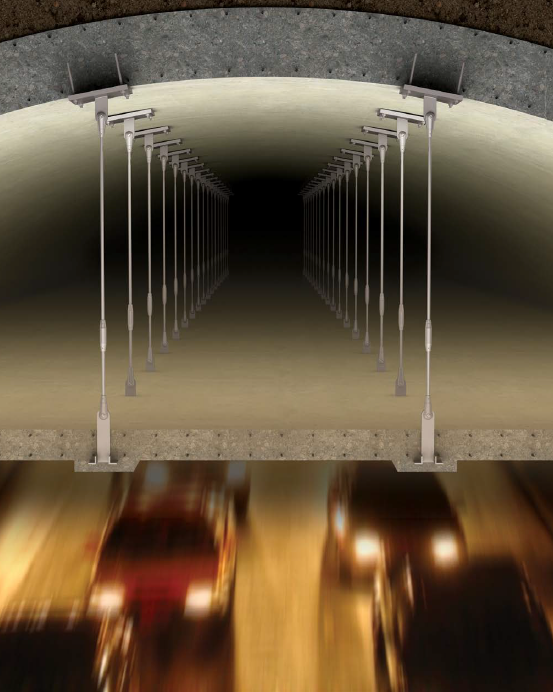 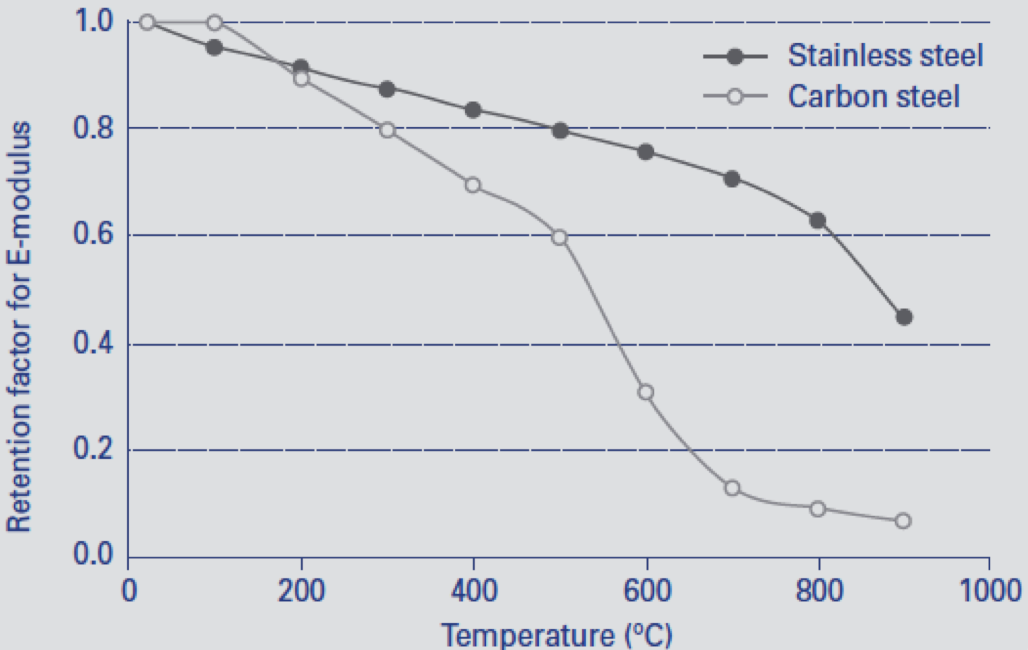 In summary, stainless steel has substantial advantages in structural use when fire risk is considered, and these advantages continue into higher strength and lower deflections at elevated temperatures.

CLEM7 image above courtesy of Ancon.

This article is featured in Australian Stainless Magazine issue 65, 2019.