Coloured stainless steel has helped revitalise what has become one of Victoria’s largest and most recognisable shopping precincts – Westfield Doncaster.

“The brief from the designers, Westfield Design and Construction, was to deliver a contemporary looking facade that not only provided the Doncaster shopping centre with plenty of colour but would also 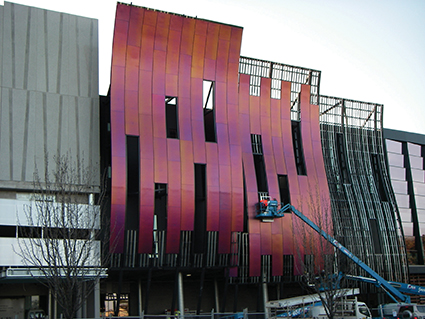 be hard wearing against Melbourne’s diverse weather conditions,” he said.

The stainless sheeting was fabricated and installed by Melbourne-based Barden-Steeldeck Industries. Manager and part-owner Michael Shacklock said this was the first time his company had worked with coloured stainless steel.

“By attaching the sheets to a sub-frame we were able to make certain that all 300 sheets of coloured stainless steel were accurately positioned to deliver the distinctive looking facade,” Mr Shacklock said.

Mr Araullo said the colour refraction from the Rosso (Italian for red) stainless steel provided a changing colour palette depending on the time of the day and viewing angle.

“The unique movement of colour across the stainless steel clad entrance is a major shift forward from traditionally sterile looking facades that appear on many shopping centres,” he said.

To avoid the potential reflectivity of the facade hindering nearby traffic safety, a Perla pattern was specified. The indentations of the pattern diffuse light and provide an optical flatness, which effectively eliminates reflections.

The pattern also provided improved strength, allowing for a lighter gauge of 1.2mm instead of, typically, 1.5mm or more.