The construction of the Epping to Chatswood rail line in Sydney is the largest publicly funded infrastructure project underway in New South Wales. The project, managed by the Transport Infrastructure Development Corporation, will increase the capacity of the CityRail network and provide direct rail access for the first time to the growing North Ryde/Macquarie Park area. Due to be completed in 2008, the 12.5 kilometre underground passenger line will include four new underground stations at Epping, Macquarie University, Macquarie Park and North Ryde. 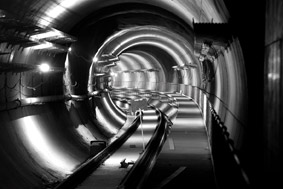 For the cladding components, Townsend purpose designed and engineered all fixings in 316 stainless steel to meet the high performance requirements of the project. The system also incorporated 304 patterned stainless steel wall and ceiling panels for which Townsend developed a fabrication technique which optimised both the aesthetics and strength of the panel. Overall, the project used some 160 tonnes of stainless steel.

Townsend Group had up to 100 people working on the project at the one time, spread across the 4 rail stations and at their warehouse and manufacturing facility in Sydney. They began their involvement in the project in September 2005, and are expected to complete the contract by April 2007.