To overcome environmental concerns around landfill, Perth’s largest waste management authority, Mindarie Regional Council, is building a facility for the 70 per cent of household waste that is organic material and can be composted. 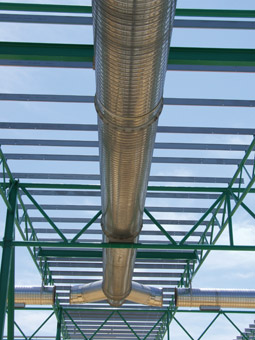 The $80m building is due for completion in 2009 and will save on landfill, reduce greenhouse gas emissions, and will produce a rich organic matter that may be added to Perth’s sandy soil.

The new composting facility, to be built using a prize-winning technology developed by Canadian firm, Conporec, comes at a time when the ongoing feasibility of landfill in crowded cities is questionable.

In September this year a new hazard came to light when residents of the outer-Melbourne suburb of Cranbourne were advised to leave after pockets of methane were found in their homes at a dangerous 60-65 per cent concentration. The methane had leached from a nearby landfill - concentrations of 5-15 per cent are considered an explosion risk.

The composting building’s odour removal system uses extraction ducts to capture and then transport air to a biofilter. Stainless steel was specified because of its corrosion resistance.

Organic waste is broken down as it would be in nature, but the composting process is much faster. The compost is produced in a sealed building at negative pressure, where moist air is forced through. The resulting atmosphere in the building is hot, humid and corrosive. Composting produces heat which quickens the corrosion process, particularly in Perth’s hot climate.

“With the help of Austral Wright Metals, we were able to convince them of the fabrication and cost benefits of AWM 404GP®, a ferritic stainless steel with equivalent corrosion resistance to 304. We have used it for the lock-seamed spiral ducts, lobsterbacks, and plenums. We fabricated the new grade without dramas, and KCL is now installing it. It looks good.”